One Billion Americans, by pundit Matthew Yglesias, is mostly a book about politics, international relations, and public policy—none of which are a focus of this blog. But as the title indicates, the book is also ostensibly about demographics. Could or should the U.S. try to increase its population to one billion or thereabouts? If so, how long would it take? These are fun questions to think about. 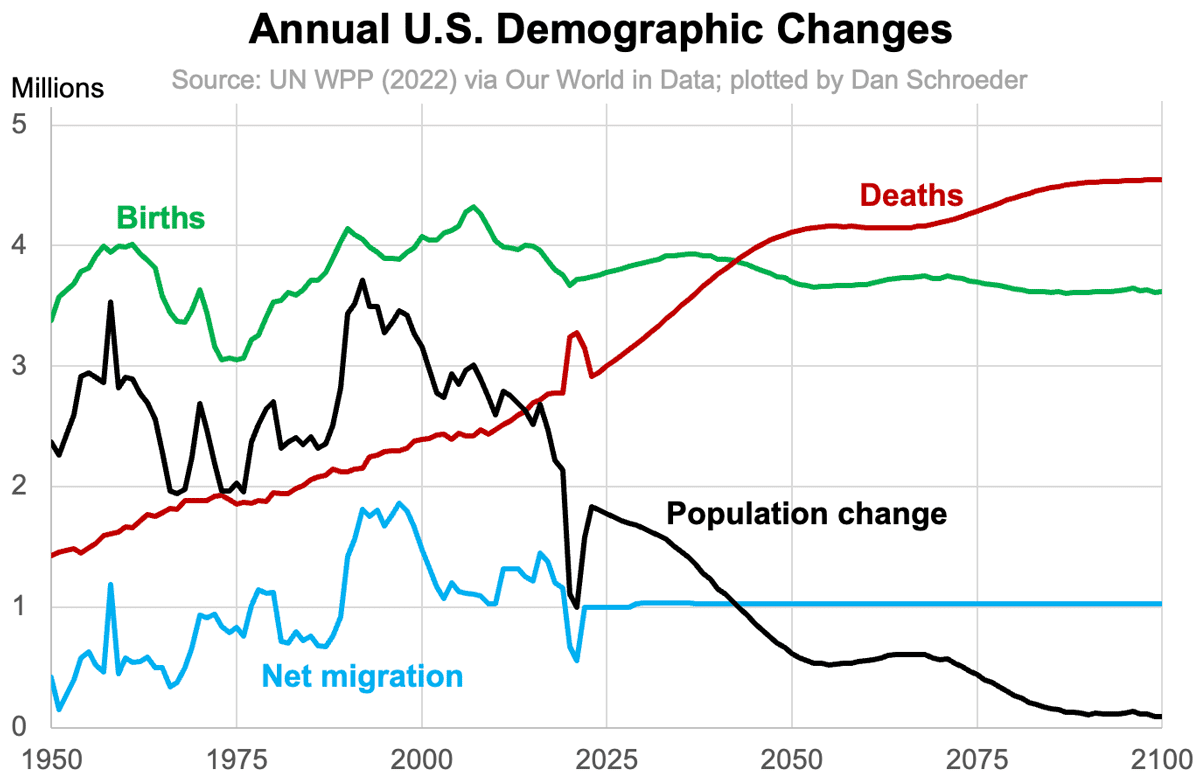 The left half of the graph shows the past, while the right half, from 2022 on, shows the latest projections of the United Nations Population Division. Notice the spike in deaths and dip in immigration from the Covid pandemic, which have combined to take a sizable bite out of our population growth over the last couple of years.

Looking forward and hoping for no more deadly pandemics, the projection shows our population continuing to grow through 2100, but more and more gradually, approaching 400 million by century’s end. Nowhere near a billion.

Notice that we’re currently at around 4 million births and 3 million deaths each year. But the number of deaths is rising rapidly (as our population ages) and is expected to surpass the number of births about 20 years from now. After that, population rises only because of immigration.

In the book, Yglesias proposes that the U.S. encourage more births by enacting a universal child allowance, guaranteed parental leave, publicly funded child care and preschool, and other pro-family policies. He’s vague about how much difference he thinks all this will make, but others have pointed out that the countries he holds up as good examples for these kinds of policies (Finland, Scotland, Sweden, Germany, Belgium, Japan) tend to have fertility rates that are even lower than ours. (Sweden’s is infinitesimally higher.) In an interview with Kelsey Piper of Vox, Yglesias responded by noting that Americans tend to be more religious than Europeans, and religious people tend to have more children than those who are not religious.

Let’s suppose, then, that through pro-family social programs we can lift the U.S. fertility rate somewhat higher than that of the rich countries in Europe and Asia. Exactly how much higher might that be? Yglesias cites a New York Times summary of data from the General Social Survey, claiming that “The gap between the number of children that women say they want to have (2.7) and the number of children they will probably actually have (1.8) has risen to the highest level in 40 years.” The suggestion, then, seems to be that the social policies listed above might raise the U.S. fertility rate up to something like 2.7.

I think this is a fantasy. For one thing, both the average GSS survey response and the actual fertility rate have dropped somewhat since 2018, when that New York Times article was published. But more importantly, the actual wording of the GSS survey question was not “How many children would you like to have?”, but rather, “What do you think is the ideal number of children for a family to have?”. Some respondents are likely to answer this question from the perspective of a child instead of a parent—especially if they personally have no wish to start their own families—and the number of children in an average child’s family will always be larger than the number of children born to an average adult. The trend in these survey responses over time can still teach us something, but I don’t see how we can use the numerical level of the average response to predict how many children people would have if they could afford them.

Nevertheless, let me err on the side of being overly generous and assume that somehow the U.S. might raise its fertility rate from the current value of 1.66 children per woman back up to the replacement value of 2.1. Then the green curve on the chart above would jump up by about another million, and the U.S. would get a boost of a few tens of millions of births over the next few decades. In the long term, though, the green and red curves would merge, and any further population growth would come entirely from (net) immigration.

Next question: How high might we raise the annual U.S. immigration numbers? Yglesias doesn’t say. The average over the last two decades has been about a million a year, and that’s what the U.N. projections assume going forward. At that rate it would take us 600 years to add another 600 million Americans. (The exact time required would depend on how many children the immigrants have after they arrive, which in turn would depend on their distribution in age, sex, and education level.)

Here is a plot (data here) of the annual number of people obtaining lawful permanent resident status in the U.S., as a fraction of the population at the time, since 1820: 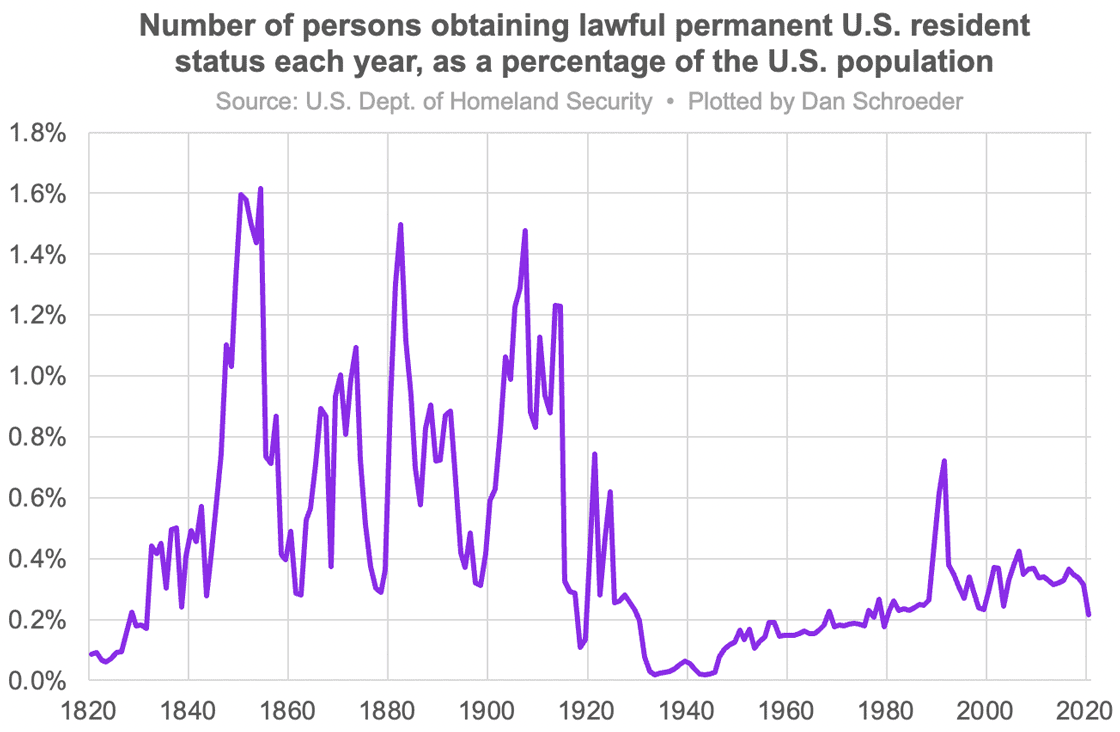 In the heyday of U.S. immigration, from 1847 through 1914, we were taking in nearly 1% of our population each year, on average. If we wanted to do that today, we’d need to triple our recent legal immigration rate.

Before continuing that thought, I should point out that U.S. fertility rates were also much higher in the past. So even when immigration rates were in the vicinity of 1% of our population each year, the high birth rate meant that the fraction of U.S. residents who were born in other countries never exceeded 15%. Today that fraction is about 14%, despite our much lower immigration rate (as a percentage of population), because our birth rate is also much lower. If we were to raise our immigration rate to 1% of population over a sustained period, our foreign-born fraction would rise to a level never before seen in the U.S. as a whole, though familiar in places like California and Australia.

Is this close to what Yglesias has in mind? We can only speculate. He devotes considerable space in his book to arguing that the U.S. can hold a billion people, while neglecting to say how long he thinks it might take us to reach that level. But putting a specific time scale on the target adds clarity to some issues the book raises, while inviting us to ponder some further questions.

For instance, a hundred years is considerably longer than the time scale—just a few decades—over which the world needs to transition away from fossil fuels. So we needn’t let the prospect of a much higher population clutter our thinking about how to carry out that transition here in the U.S. Then, after a few decades, we’ll have a much clearer picture of what it might take to scale up the fossil-free energy system to meet the needs of the hypothetical one billion Americans.

On the other hand, a hundred years is about the same time scale over which the world as a whole will (probably) transition from rapid population growth to likely decline. Projections suggest that this transition will be especially dramatic in Asia and Latin America, the origins of most U.S. immigrants in recent years. Meanwhile, a century of further economic development is likely to bring the wealth level of much of the world closer to that of the U.S.

So although there seems to be no shortage of people who would like to migrate to the U.S. today, we shouldn’t assume that this will be the case a full century into the future, as we (hypothetically) seek the hundreds of millions of immigrants we would need to reach the one billion level. Already we compete with places like Europe, Canada, and Australia to attract many of the world’s migrants. In a hundred years the list of other rich countries that are eager to attract migrants could be much longer.

Of course there’s nothing sacred about a 1% annual immigration rate. Could we raise it significantly higher still? That would shorten the time needed to reach one billion, but would also bring us into truly uncharted cultural territory, with immigrants arriving so fast that they could soon outnumber native-born Americans. And although I said I’d forget politics, I have to draw the line somewhere on such politically far-fetched speculations.